http://hughhewitt.townhall.com/ has a wonderful Harry Reid picture. Enjoy the picture then check out the site. It's great!

Also, I found a great piece by Ted Nugent at Opinion Journal. Having lived through the sixties myself and embraced the soul stealing sex and drugs lifestyle for a (thankfully) short time, I can agree with Nugent whole-heartedly!

The Summer of Drugs
Forty years ago, dirty, stinky hippies converged on San Francisco to "turn on, tune in and drop out."

This summer marks the 40th anniversary of the so-called Summer of Love. Honest and intelligent people will remember it for what it really was: the Summer of Drugs.

Forty years ago hordes of stoned, dirty, stinky hippies converged on San Francisco to "turn on, tune in, and drop out," which was the calling card of LSD proponent Timothy Leary. Turned off by the work ethic and productive American Dream values of their parents, hippies instead opted for a cowardly, irresponsible lifestyle of random sex, life-destroying drugs and mostly soulless rock music that flourished in San Francisco.

The Summer of Drugs climaxed with the Monterey Pop Festival which included some truly virtuoso musical talents such as Jimi Hendrix and Janis Joplin, both of whom would be dead a couple of years later due to drug abuse. Other musical geniuses such as Jim Morrison and Mama Cass would also be dead due to drugs within a few short years. The bodies of chemical-infested, brain-dead liberal deniers continue to stack up like cordwood.

As a diehard musician, I terribly miss these very talented people who squandered God's gifts in favor of poison and the joke of hipness. I often wonder what musical peaks they could have climbed had they not gagged to death on their own vomit. Their choice of dope over quality of life, musical talent and meaningful relationships with loved ones can only be categorized as despicably selfish.

I literally had to step over stoned, drooling fans, band mates, concert promoters and staff to pursue my musical American Dream throughout the 1960s and 1970s. I flushed more dope and cocaine down backstage toilets than I care to remember. In utter frustration I was even forced to punch my way through violent dopers on occasion. So much for peace and love. The DEA should make me an honorary officer.

I didn't listen to Cat Stevens in the sixties, but I did listen in the early seventies. I wish I could rip his songs out of my ears as if I'd never heard them. This guy is scum. 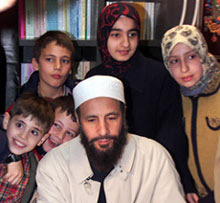 Extremist Muslim Cat Stevens/Yusuf Islam & His Extremist Muslim Family
I don't get it. Why does any European or American embrace Islam? Well, I can understand a male chauvinist pig (the real ones--not the ones given that label by feminazis) doing it, but why would any woman embrace such a religion? And of course, how do you spell chutzpah? I spell it B i l l C l i n t o n... How dare that hypocrite complain about any Bush pardon? This sleaze-bag did it for money!

And check this out!

Even independent-minded celebrities are now questioning the establishment media orthodoxy that the debate over global warming and its effects are all but over. In a phrase familiar to those who study pop culture, it appears that the global warming scare may have "jumped the shark."

And finally, on the global warming front, apparently the earth has been much warmer in the past, and the glaciers didn't melt, the seas didn't inundate the land and we didn't roast! From Brietbart.com:

Richard's main page
Posted by Richard at 12:01 PM No comments: I just discovered Michael Yon (michaelyon-online.com). He's a reporter who actually reports the truth of what's happening in Iraq.
Let me warn you, there is some heartbreaking content on the site. Like this report:

On 29 June, American and Iraqi soldiers were again fighting side-by-side as soldiers from Charley Company 1-12 CAV—led by Captain Clayton Combs—and Iraqi soldiers from the 5th IA, closed in on a village on the outskirts of Baqubah. The village had the apparent misfortune of being located near a main road—about 3.5 miles from FOB Warhorse—that al Qaeda liked to bomb. Al Qaeda had taken over the village. As Iraqi and American soldiers moved in, they came under light contact; but the bombs planted in the roads (and maybe in the houses) were the real threat.

The firefight progressed. American missiles were fired. The enemy might have been trying to bait Iraqi and American soldiers into ambush, but it did not work. The village was riddled with bombs, some of them large enough to destroy a tank. One by one, experts destroyed the bombs, leaving small and large craters in the unpaved roads.

The village was abandoned. All the people were gone. But where?

Richard's main page
Posted by Richard at 7:53 PM No comments: