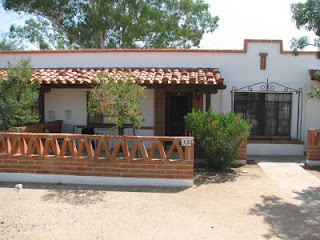 We've got a nine month lease on this place in what I call a "geriatric" community. the scary part is I'm old enough to live here. We've got a heated pool right across the street. It's quite nice.

I've settled in here in Arizona. I received the job offer and moved down here to Green Valley (which is just south of Tucson) the same day. Sahuarita High School is a great little school. The staff is excellent and the students are for the most part great. It's difficult leaving the grandkids but it needed to be done.

I'm now officially a double dipper. I'll be getting retirement from Nevada and working in Arizona. If my wife was still working we'd be on easy street. Without her income we're taking in a little less, but that's the way it goes, I guess.

Posted by Richard at 8:30 PM No comments:

I retired in June and although I fully intended to get another job, I was in no hurry. Then my wife lost her job and we were facing two thirds salary for me and 50% (unemployment) for her. I started looking. I had several interviews and almost got a position in Idaho, but a former supervisor, who I shouldn't have used for a reference because we disagreed a lot, but did, because my other references were unavailable in July, backstabbed me.

Then a had a phone interview and got a position in southern Arizona. I was offered the position on Friday and school started on Monday. We packed up and arrived Saturday morning. I spent Monday and Tuesday fighting with AZ certification, and finally had to go with a sub certificate. We almost went home Monday night, but tried again to get licensed and got the sub certificate on Tuesday.

We immediately moved out of the motel, signed a lease and are living in a comfortable, small apartment.

Then I couldn't get my wife's computer to work with the wired internet. Mine worked fine! I messed with it until it worked and went to bed. Today I was in the classroom for the first time and loved it, but when I got home I was anxious to get some work done online.

Now my computer wouldn't work with the wired internet. My wife's was still working fine. So down to BestBuy for a wifi router and a printer--wireless of course! Router worked great. Printer connected to the router just fine. Computer wouldn't communicate. I finally had to plug the printer into the router directly and low and behold it finally worked! So once again I'm going to bed very, very late!

Posted by Richard at 9:25 PM No comments:

When Osama Bin Laden was killed, he was met at the Pearly Gates by George Washington, who slapped him across the face and yelled, "How dare you try to destroy the nation I helped conceive!"

Patrick Henry approached, punched him in the nose and shouted, "You wanted to end our liberties but you failed."

James Madison followed, kicked him in the groin and said, "This is why I allowed our government to provide for the common defense!"

Thomas Jefferson was next, beat Osama with a long cane and snarled, "It was evil men like you who inspired me to write the Declaration of Independence."

The beatings and thrashings continued as George Mason, James Monroe and 66 other early Americans unleashed their anger on the terrorist leader.

As Osama lay bleeding and in pain, an Angel appeared. Bin Laden wept and said, "This is not what you promised me."

The Angel replied, "I told you there would be 72 Virginians waiting for you in Heaven. What did you think I said?"

Posted by Richard at 9:31 PM No comments:

An environmentalist changes his mind on nuclear power!

A crappy old plant with inadequate safety features was hit by a monster earthquake and a vast tsunami. The electricity supply failed, knocking out the cooling system. The reactors began to explode and melt down. The disaster exposed a familiar legacy of poor design and corner-cutting. Yet, as far as we know, no one has yet received a lethal dose of radiation.

Some greens have wildly exaggerated the dangers of radioactive pollution..."

Posted by Richard at 8:01 PM No comments:

Ann Coulter has a great column (here) about the radiation scare in Japan. I've read research for years that a little radiation is good for you. She quotes much of the research I've read and also some I haven't seen.

With the terrible earthquake and resulting tsunami that have devastated Japan, the only good news is that anyone exposed to excess radiation from the nuclear power plants is now probably much less likely to get cancer.

This only seems counterintuitive because of media hysteria for the past 20 years trying to convince Americans that radiation at any dose is bad. There is, however, burgeoning evidence that excess radiation operates as a sort of cancer vaccine.

As The New York Times science section reported in 2001, an increasing number of scientists believe that at some level -- much higher than the minimums set by the U.S. government -- radiation is good for you. "They theorize," the Times said, that "these doses protect against cancer by activating cells' natural defense mechanisms."

Posted by Richard at 7:00 PM No comments:

This is a fantastic video!

Posted by Richard at 6:46 PM No comments:

This is a very good description of how our education system is broken:

"There are serious problems with our education system today - with the way that schools and school district and students and parents take teachers who enter the education field full of life and hope and a desire to change the world and positively impact kids, and beat the life out of them and villainize them and blame them for everything - and those need to be brought to light. If this 'scandal' opens the door for that conversation, so be it. Let that conversation begin. Stay tuned here."

It was written by Natalie Munroe who was suspended following the discovery of her blog which contained complaints about the school (without mentioning its name) she taught at. Munroe's blog is here: http://natalieshandbasket.blogspot.com/

Posted by Richard at 7:59 PM No comments:

It's Snowing Because it's too Hot!?

Ok - I am sitting at the Dallas Fort Worth Airport right now - stranded because of the 100-year-blizzard that just hit Texas and Oklahoma - and the news from Al Gore is this: "increased heavy snowfalls are completely consistent with" you guessed it…" man-made global warming."

I've about had it with this lunacy and nonsense.

How stupid do these people think we are?

Posted by Richard at 8:22 PM No comments: