We've had a company putting in a new sewer line the last few months. Today they were paving the road where they had dug. Unfortunately they had very narrow pathways through the cut in the asphalt which was about a foot deep. I say unfortunately because my son missed the path and dropped his car into the hole. Two popped airbags are the result! When we went back for these pictures they were widening the path through the cutout. You can see (kind of) how deep it is. When I called the company I used the word "pothole" and the man said in a sarcastic way, "We don't put potholes in the road, Sir!"

I told him "You most certainly did! You cut the asphalt out of the road!" He's sending a claim form.

I'm not feeling too charitable about it. My son is very upset, his car is damaged, and everyone knows how expensive airbag replacement is. When he got home he was coughing and choking from the fumes caused by the airbag explosions. The dashboard was still smoking!

I'd followed a truck pulling a trailer through the same spot about an hour earlier. The truck made it through, but the trailer dropped into the hole. The path was very narrow and very hard to see. The paving company widened it after my son dropped his car into it. They better pay for the damage, or else. 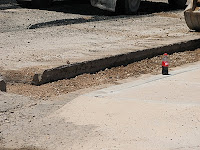 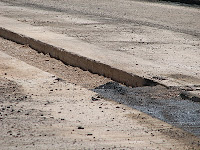 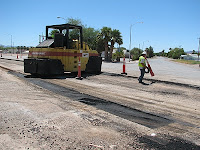 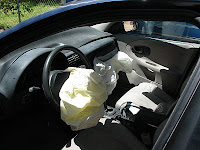 Posted by Richard at 5:09 PM No comments: